Hello Darkness my old friend - Results of the First rite -

He who fights with monsters should look to it that he himself does not become a monster. And if you gaze long into an abyss, the abyss also gazes into you. -Neitze


I adore monsters and abysses...

It should be noted that as an accomplished Monist, I am, and for several decades now, have been capable of Mu/Zen/No mind or Gnosis without any effort. I understand that what Chaos Magicians might call Gnosis simply happens and the illusion of actually doing it on purpose is part of the game we play as the great universal dao.  I can and have been able to play at dwelling in utter mental silence for a long time, and have gone hours even days without much more than a glimmer of subvocal or intentional though... I think of it as a calculator, you don't always need it to do math.

Gnosis then for me is easy, I don't have to play elaborate games to achieve this state.  I don't use it to work rituals or sigils very often.  I see little point, or should I say, "Saw" because things are different now.

I am writing this now in a state of Gnosis, and empty-mindedness.  I have been told in this regard I am uncommon.  Some people go years without ever even experiencing a single moment of Emptiness.

I can't imagine going through such a noisy life all the time.  Every day. When I do occasionally experience a kind of anxiety where I hear the same song in my head all day, or have an argument with someone, I find this echoing madness unbearable.  My wife will attest, when I get like this, I'm a pain in the ass.  If this is how people live their lives from day to day... I pity them.

However, ever since entering the 23 current, jumping in with both feet, my mind has been buzzing.  A mostly pleasant buzzing... but a buzzing nonetheless.

For several days now, getting anything else in or out of my mind has been impossible.  This is all the more difficult for me because I am in a waning phase of relearned skepticism, so there was a subtle feeling of doubt, that I am being silly.  That this is all just a scam by a con artist selling expensive Occult books, are the synchronistic events going on just "coincidence?"

This blog is a result of those racing thoughts.  I felt an urge to say everything, to vomit forth every occult thing I knew.  Was I preparing myself?  Was I being driven mad as S. Ben Qayin warned?

Quiet Meditation was difficult, almost abandoned.  The mania was surreal.

Then Tonight, I performed the first Rite of Nyarlathotep.  My mind is silent as a gentle snow in a winter forest.

I cast the circle (hard to do in the dark in the middle of a grassy field with no way to be sure where you laid the salt) lit the candles, Lit the incense. I shed my shirt and took a deep breath.

I spoke the words, my voice one of authority and power I haven't felt in a while, I drew blood with that cruel Karamibit I selected, and felt no pain... the edge was scalpel sharp... and at first the blood didn't flow. It felt good, and I had to resist the urge to keep going. 2 inches should be enough... 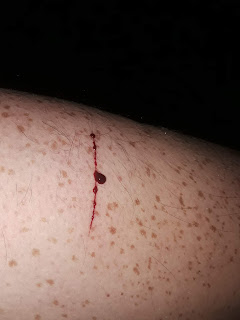 I called out to Nyarlathotep the creeping chaos and I waited.

I listened, I watched, I turned and held my hands outstretched.  The sultry air, normally uncomfortable for me (I hate humidity) felt soothing and comforting, like being in a shower, as if the night air was trying to help me to be calm.

I thought of nothing but Nyarlathotep.  I saw white Pyramids in black sands (and I do mean SAW, because that is important, I cannot visualize easily, and if I SEE something I notice it) and I saw bizarre tentacled shapes in dark places.  I saw the Black Pharoh, but only briefly, and he reminded me not of a normal man, but of a shadow person like out of the many folk legends... An inky blackness in black robes, with pale glowing eyes.  Not unlike the Shadow people I have seen and done battle with decades ago (yes... that is what I said, and the tale will be written later).

I felt chills stand the hair up on my arms, on the back of my neck, I felt the familiar butterfly pleasure of being in the presence of something outside paying attention to me. My intuition compelled me to speak, speak as if I was in the court of a king.  The way I used to speak to god when I was a boy. As if I had an audience or an interview, and was making a case for them to hire me.

"Is my offering of this incense not sweet?  Are the candles not elegant?  Is my blood not potent?"  I asked politely in the old way of speaking, a coy way beloved by demons, taught to me by my prior workings in my darker insane youth...

Speak as if you are one of them, do not prostrate yourself, do not command.  Recognize your betters, but show no fear.

I told my desired new patron my intentions, my plans.  I would be back again a total of two more times and would expect a CLEAR answer on the third night. but that I was here and will return twice more to prove my sincerity.   I was heeding the call.  I was here because I was summoned, and I would join with the outer gods, but NEVER as a SLAVE, but as a companion, a friend, and an ally.  I would devote my studies to their dark chaotic wisdom and would give them what my humble skill and biological ability allow. I am a mote of dust in a cosmic infinity, and what little I can give, will be given freely as to a friend.

I told them that as a sign of my devotion I would wait in silence until the Candles burned out, or until it was time for me to retire.

There was no wind up until this point... and the candles were burning brightly despite the gentle drizzle.  I felt like this was going to be a while... so I did my best to enter that elusive state of emptiness I have found hard to reach lately.  It came in fits and starts, but it was happening.

But then, as if on command, a gentle zephyr arose from the east and one by one the candles began to be snuffed... First from the east, then minutes later the south, then almost at once the north.  the incense blazing a bright orange... and the West Candle flickered and danced refusing to be extinguished.

I couldn't help but feel impatient, in all honesty, I was offering patience as my first offering of service, but I knew deep down I had little to give because of that niggling bit of doubt that remained.  Candles can burn for hours... It should be noted, that humbling myself like this is new to me... In my prior workings, I WAS the Demon...

Then it dawned on me - Nyarlathotep is me.  Or at least an idealized state of self that I aspire to have. And thus, I am already Nyarlathotep a tentacle of the soul of the outer gods.  And the evocation is meant to also be an invocation.  Was this just another case of possession like when I was a child?  this felt different.  Not a possession... no.

I waited, arms outstretched, in silence... 20 minutes passed and I stopped thinking about the candle.

My hair was flung to and fro as my bare flesh reveled in the sensation.

The candle was snuffled, and I smirked... I could almost hear a voice say - you are dismissed.

I was overcome with calm, with relief, with thanks and respect.  I spoke softly - I hear your command, and I shall depart.  I will return, if not here to another place tomorrow night and will await you again.  I thank you for coming, for hearing my call.

I intuitively took my finger and smeared the blood of my offering on my finger, and dipped it in the wax of the last candle to go out, then drew a mark on the candle in bloody wax.  This candle will be the special one now.

Quickly gathering my things, and cleaning up, I left the incense stick, the final embers burning brighter than ever, the stick itself now burning unnaturally.  I left the area smiling, the state of contentment was magnificent.  I was home.  I was in communion...

As I reached the parking lot, a lone bat, about the size of my hand, was circling overhead, I haven't seen bats in ages... I imagined it to be like Nyarlathotep... and myself as one of the bugs it was devouring... The insect will become the bat... and I am like that now.

I walked the rest of the way home in a trance, my mind in union with the energies and presence that sent the hair on my arms to stand on end.  I passed several joggers on the road, each couldn't take their eyes off me...

6'1", a long dark Duster coat, a staff... and a bag, smelling of incense and candle flame with a distant look in his eye...

I have no doubt now whatsoever... I walked in the door, my home was as it always is.  My wife, instinctively knew not to ask any questions.  I gave her a gentle kiss... and sat down to collect my thoughts and write this work.

I will see you again soon...

GO BACK TO TABLE OF CONTENTS.